Roger Rohrdanz, Dave Lindsay and I recently made an excursion out to the Auto Club Dragway at Fontana to see for ourselves how much work has been done so that the drag strip can re-open. Roger was the dragstrip photographer prior to the closing of the drag strip. (Editors Note, Roger's pics will appear with a similar version of the article at Hot Rod Hotline) Dave Lindsay is the owner/publisher of SoCalCarCulture that provides information on car shows and events throughout Southern California. It is a website that is very important to check in order to plan your itinerary. 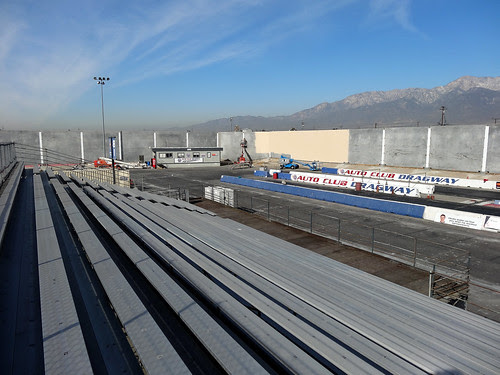 Litigation by homeowners prompted a judge to order the closing of the drag strip until an environmental impact report could be prepared and acted upon by the court. A sound wall was proposed as a way to satisfy the intent of the law at a cost exceeding one million dollars and the judge authorized the reopening of the drag strip. This came as a welcome relief to Southern California drag racers that had recently lost Irwindale Speedway's drag strip when the promoters went into bankruptcy. Irwindale has since reopened and now provides 1/8 mile public drag racing. The Auto Club Dragway at Fontana, California is slated to re-open February 15, 2014, according to David Talley, Director of Communications for the Auto Club Speedway. Previously there had only been a sloping ten foot concrete wall and an eight foot chain link fence between the track and a railroad track on a further ten foot setback. Not much room for a concrete noise barrier, but engineers can design remarkable structures in such a small space. 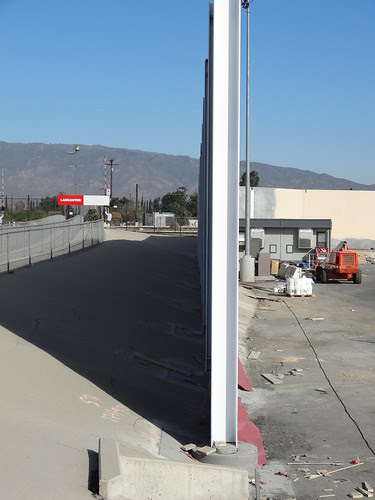 The plaintiffs were a local group of concerned citizens in the San Bernardino County area known as CCoMPRESS, and were represented by Chatten, Brown & Carsten legal firm. They were upset about the noise from the railroad trains and the drag cars at the drag strip. The new sound barrier will not address the issue of railroad noise, but their suit against the drag strip has been adjudicated and released by the court. This lawsuit has dragged on for years and caused harm to many loyal drag racers that used the track in the past. It may now be possible to have a renewed street legal program added to the normal racing leagues that used the drag strip in the past. The drag strip had existed on the south side of the huge raised oval track in the past and the original environmental study authorized the drag strip in that location. The owners of the property moved the drag strip to the northern end of the property where the oval track could not shield the new location from creating noise that bothered the residents. 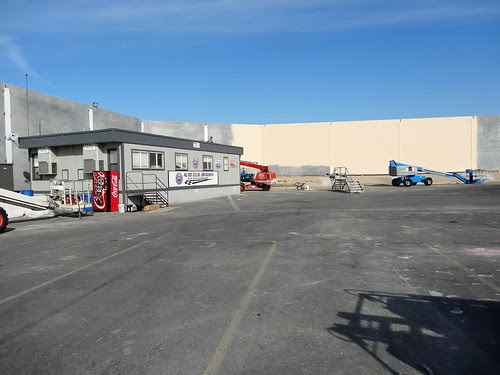 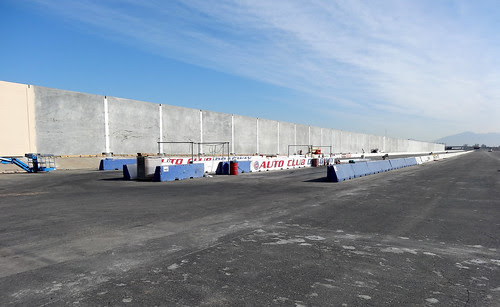 The Auto Club Speedway has invested a great deal of time and money to bring drag racing back to Fontana. The wall is massive, 24 feet high, 1800 feet long and each slab is a good thirty feet in length by six inches thick. The rebar reinforced concrete slabs were poured on the pavement in about a week and after drying were lifted by a heavy crane onto I-beams, where they were bolted into place. The steel I-beams are buried in reinforced concrete pylons eighteen feet deep. Another section of the wall covers the back of the track creating an L-shaped structure so that the noise will be focused upward where it will dissipate straight up into the atmosphere. Prior to this the noise would hit the small, ten foot high retaining wall that was built at a 45 degree angle and this would condense the noise and shoot it straight out towards the surrounding homes, which were a mile away. The next step is the removal of the heavy equipment, the continued curing of the concrete slabs and the painting of sponsor names and advertisements. I asked if there would be increased seating capacity, but Mr Talley did not know at this time. What Auto Club Dragway at Fontana needs is more spectator involvement; for Auto Club Speedway has proven their commitment to continued drag racing and now it is up to the fans to support this rather interesting and unique drag strip. No one has worked harder or has been more committed during the closure of the drag racing facility than the Auto Club of Southern California. They worked diligently to keep the topic alive and their support, both monetarily and through their prestige in the community has made all the difference. Now it’s time to go racing. Gone Racin' is at RNParks1@Juno.com 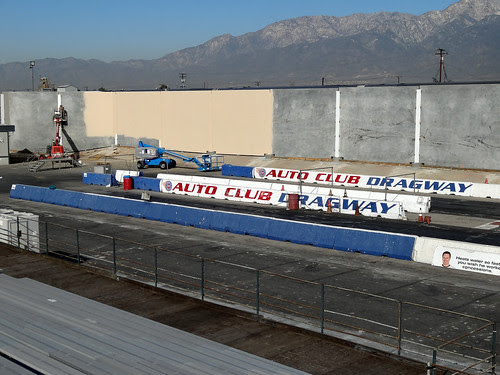 The 2014 schedule is available here.

View all the pics in the Slideshow below...

SoCalCarCulture - THE place to find out what is happening in Southern California's Car Culture!
Posted by SoCalCarCulture.com at 11:19 AM No comments: